A step-by-step guide to putting on tefillin to pray in the morning. 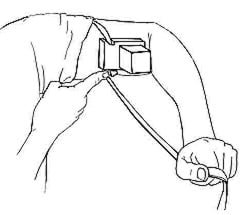 You have two black leather boxes with straps in your tefillin bag. One is for the arm, the other for the head. Take out the arm one first—that’s the one that’s one smooth box, rather than four compartments.

Remove the tefillin from the plastic case.

The arm-tefillin goes on the weaker arm: right-handed people do the left arm, lefties do the right arm.

Roll up your sleeve so that the tefillin is in direct contact with your arm. Put your arm through the loop formed by the knotted strap. Place the black box up on your bicep, just below the halfway point between the shoulder and the elbow, right across from your heart (see illustration).

2. The Blessing on the Tefillin

Recite the blessing. If you can read and understand the original Hebrew, say it in Hebrew. Otherwise, you can say it in any language you understand.

Here’s how it sounds:

Here’s what it means:

Blessed are You, L‑rd our G‑d, King of the universe, who has sanctified us with His commandments, and commanded us to put on tefillin.

Focus on what you’re doing. From the time you make the blessing until both tefillin are in place, do not talk. Don’t even wink. Just concentrate on hooking up your mind, heart and deeds, and binding them to G‑d. 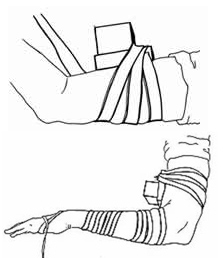 Tighten the strap around your arm, mindful that the knot stays in direct contact with the box.

Continue to wrap: two more times over the strap-socket of the black box and around the biceps, then seven times around your arm and once around your palm. Leave the remainder of the strap loose.

Below are video instructions:

Next, get out the head-tefillin. Remove the tefillin from the plastic case. The box goes on your head, just above your forehead. Center it in the middle of your head directly above the point that’s right between your eyes. The daled-shaped knot should rest on the base of your skull. 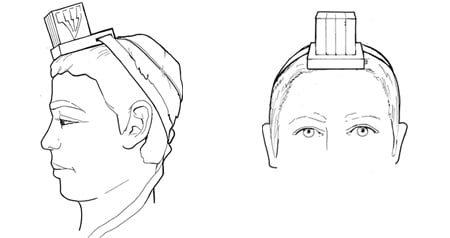 Now back to your hand. Wrap the remainder of the strap three times around your middle finger, like this: once around the base, then once just above the first joint, then one more time around the base. You’ve got some strap left over, so wrap it around your palm and tuck in the tail end.

It is best to pray the entire morning prayers in one’s tefillin. However, if this is not possible, at least say the Shema prayer:

In the original Hebrew:

Cover your eyes with your right hand and say:

Recite the following verse in an undertone:

Recite the following verse in an undertone:
Blessed be the name of the glory of His kingdom forever and ever.

The Complete Tanach with Rashi's Commentary